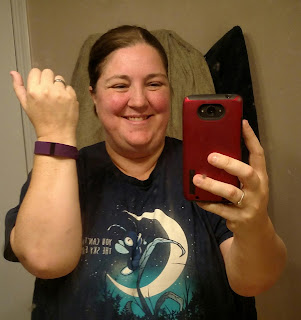 Three weeks ago, I bought a Fitbit Charge HR.  I'm addicted.  In the last three weeks, these things have happened.

- My weight has gone down 5 pounds.

- I have been intentionally physically active every day except three of those days, and those all had circumstances that were beyond my control (sick kids, sick me, etc)


- I have stayed under my calorie goal of 1600 per day every day with the exception of a couple of days.

- I have burned my goal of calories for the day, which is 1000 more than taken in, every day with the exception of the sick days.

This data is eye-opening for me and I can see exactly where my successes and failures lie.  And it's fun!  I have been known to walk in place for 30 minutes or so just to make sure I get my steps in for the day if it has been a light day for me.  Jon thinks I'm nuts.  But hey, anything to get a little exercise, right?

I can't wait to see what else happens on my Fitbit weight loss journey.
Posted by Anita Powell at 11:22 AM No comments:

Email ThisBlogThis!Share to TwitterShare to FacebookShare to Pinterest
Labels: health 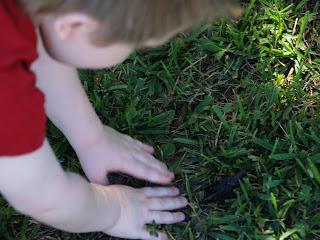 The other day, my parents and I took the boys for a walk.  Last week we talked about animals in our preschool lesson, so we decided to identify as many animals as we could on our nature walk.  Nathan's favorite were these giant black grasshoppers.  He got down as close as he could and studied them, jumping back as they jumped away.  We decided to count them, because there were so many of them around us.  On our way back to the car, he found a patch of grass where a bunch of them were resting.  He decided to chase them.  I strolled Nicholas into the shade and watched my oldest baby run around and chase the grasshoppers.  The joy in his face - the pure and beautiful in-the-momentness (did I just make up a new word/phrase?) was amazing.  And it made me think.  If I had been in a hurry, we would have missed this moment.  If I had been talking or playing on my phone, I would have missed his joy.  It is so easy to get caught up in the things we have to do every day.  And I understand the need for schedules and watches and being somewhere on time.  Sometimes you can't avoid it.  But right now, in this season of my life, the important thing is to make sure my boys feel free to chase grasshoppers.  And I need to do some of that myself.  I think we all do.
Posted by Anita Powell at 5:45 PM No comments: 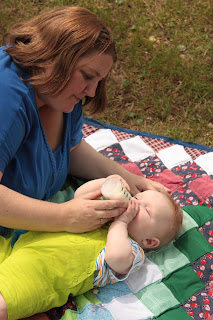 It's time to weigh in, and it may not be pretty.  Some people know my journey with breastfeeding was not a good one.  It was filled with difficulty and ended way too soon, when it was clear I was not producing enough milk to nourish my growing boy.  And before you say anything about how any woman can breastfeed if they really, really try.  Not true.  I did try.  I power pumped, ate lactation cookies, drank Mother's Milk tea, drank stout beer, and tried to breastfeed every hour.  I never got any more than a couple of ounces at a time on the pump, and my baby was always hungry.  And he was almost "failure to thrive."  That's when we decided to supplement.  I supplemented and breastfed for two months with Nathan and then stopped.  It was too emotionally and physically draining to keep trying at that point.  I was becoming depressed and had to go back to work, so I reluctantly breastfed my son for the last time.  I knew it was the last time, and it was hard to give it up, but I did because I felt like I had to.

Enter baby #2.  We were very successful with breastfeeding.  I exclusively fed him for two months and then started weaning because I knew I was going back to work.  But then I didn't go back to work.  My supply had already tanked and I just couldn't get it back.  So again, I fed my baby for the last time and said goodbye to that relationship.

But I kept feeding my babies.  Nathan got formula (and baby food starting at 4 months with our pediatrician's blessing) until he was a year old, and by that time he was interested only in real food, so that's what we did.  Nicholas is on formula and is enjoying baby food as well.  Nathan is an incredibly healthy, well-adjusted kid who is happy and intelligent and completely normal.  Actually, he is probably above average in intelligence, based on some of the assessments I've gotten from friends who know about these things.  Nicholas is thriving on his formula as well, and he just started crawling - at 7 months old.

I say all that to say this.  Breastfeed, bottle feed, do whatever you want, as long as it nourishes your baby.

All this competition, all these Mommy Wars, and really, shouldn't we be focused on taking care of our children - and each other?  Motherhood is hard.  It is made even harder with the constant stream of judgmental remarks, memes, articles, and everything else we see, screaming at us from our phones and computer screens.  For a moment, let's just stop and say to each other, "you're doing okay."  For a moment, let's stop judging each other and start caring for each other.  In fact - let's do that for ALL the moments.

Do I think we need a Breastfeeding Week?  Sure I do.  Here's the thing.  Women are kicked out of restaurants and stores for feeding their babies.  If my baby gets hungry in the store, I break out the bottle and nobody cares.  While some formula feeding moms face judgment and scorn for not breastfeeding, I have never heard of someone being kicked out of a restaurant for breaking out the bottle.  Or told to cover up her baby while feeding.  So yes, I think we need awareness.  And yes, I think we need laws to protect breastfeeding mothers and their babies.

But what I KNOW is that we shouldn't use these occasions to shame others.  To shame those who feel that their bodies failed them.  To tell other moms that some babies will have more success in life because they were fed a certain way.  To call formula "poison" and say that moms who feed it to their babies are giving them inferior nourishment.  To scorn someone or judge someone for feeding her baby the best way she can.

When Jon and I had to take Nathan to the pediatric allergist, we saw a baby drinking a bottle - with Coke in it.  I hoped it was juice, but he shook the bottle and it was clearly carbonated.  That's something we can judge.  ;)

Formula is nourishment, scientifically formulated to be as close to breast milk as possible.  And my two boys have thrived on it.

Do I feel guilty?  I did at one time.  I don't anymore.  As long as my babies are healthy, and as long as they are getting the nourishment they need, that's okay with me.  I mean, Nathan does eat dog food sometimes, so I can't be too fussy about how he was fed as an infant.

So let's live and let live, Mommys!  Let's forget about our labels and our parenting styles and our controversial issues and just be moms.  And just love our kids and do the best we can for them.  That's what's important in the end anyway, not what they were fed for the first year of their life.
Posted by Anita Powell at 2:30 PM No comments:

Whatever Happened to Being Nice? 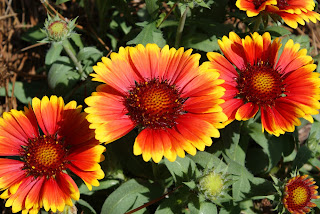 I've seen it so much lately, and it scares me.  People being ugly, rude, and intolerant to other people.  It's almost like we can't stand each other, can't stand having another person occupy the same space we do at any given moment.  And if that other person isn't whatever ideal we hold, they are stupid, ugly, worthless, and so on.

You see it in real life sometimes, through the jeers and sneers people direct at each other.  When a family with a small child enters a restaurant, for example, people stare at them with a look of utter disgust.  Before the child ever even opens his or her mouth!  This hasn't happened to us that I am aware of, but I have seen it happen to other people.

But online - that's where the real abuse happens.  Facebook comments in particular have gotten so ugly.  Have you ever read the comments on a news story?  Take my advice - just don't.  It's a black hole of the worst of humanity, spewing hatred and rage about whatever they can for no reason at all other than to spew.

Whatever happened to being nice?

I was with a group of friends not too long ago and someone started talking about The Purge.  And the question was asked: If you could kill anyone without repercussions, who would you kill?  No judgment to those in the room who said they had some people in their list (because I know them and I know they wouldn't actually kill anyone even if they had the chance) but I had to say nobody.  I've been mad at people, sure.  I've wished maybe some really unpleasant stomach trouble or something like that on someone when they hurt me, but would I kill someone?  NO.  Because I have respect for human life.  The only way I could see myself wanting to kill someone is if they hurt someone in my family.  And even then, I'm not sure I would be able to do it.  Unless it was in the moment that my kids or someone else I love was being threatened, then I would likely find the strength to pull the trigger.  But random violence?  Or violence toward someone who hurt my feelings?  No.

So what did this?  How did we get this way?  How are we now in a world where people kill each other for no reason.  Gunmen walk into movie theaters with weapons and hurt or kill strangers.  Kids shoot up classmates at school.  How did we get here?

I don't know how we got here, but I do know how we get back.  My main goal in life is to raise my boys to not be the kind of people who could ever consider shooting others just because.  (I know mental illness is a big part of this and of course, if either of them ever showed any signs of that I would get them help immediately.)  I think we, as parents, need to pay more attention.  We need to teach compassion, empathy, and respect to our children so that they will not grow up to be callous people who hurt others, whether the weapon is a keyboard or a gun.  And if they do show signs of mental illness, it is our responsibility as parents to take care of that too.  We can change society.  We just have to put in the work.  And you know what?  We need to model the behavior.  We need to show compassion, empathy and respect too.  Be an example of what kind of adult we want them to be.
Posted by Anita Powell at 5:09 PM No comments: