We open on Friday! That means we will actually have an audience (of family and friends) on Wednesday night and an audience (of seniors and students in the community) on Thursday. That's how we do it at Theatre 98. Two free shows and then opening night. I'm really excited about this show! It has been such a great experience working with this cast and getting to know them. I can't wait for people to see and enjoy the performances.
For now, here's a sneak preview... 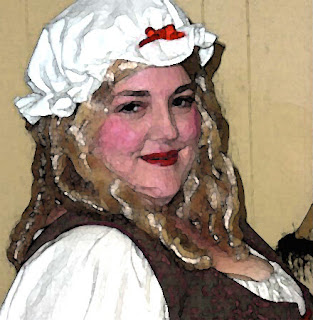 I've discovered something in the last month or so. Even when you are desperately seeking to know God's will about something, it's entirely possible that He doesn't want to let you in on the ultimate plan. I'm finding this particular discovery a bit frustrating at the moment, I won't lie! I have some choices to make.

Whenever I need to make a decision in my life, even one that seems insignificant, my mind goes back to decisions I've made in the past that did not end well. I think of my marriage, I think of my behavior in school the first time around, and I think of financial decisions that were not the best. This usually reminds me that decisions I make have lasting consequences and that I need to choose carefully. Sometimes it cripples me with fear. Sometimes it makes me think that this seemingly insignificant choice is the one that will destroy my life. That's when it gets scary for me.

But the truth is, I've made bad choices in the past - we all have - and I have to learn from those mistakes and move on. I know that the future God has for me is a million times better than any that I could dream up for myself. I know that if I just let Him drive, we will reach the proper destination. But I can't stop myself from backseat driving. I can't stop myself from reaching for the phone and sending a text message I know I shouldn't send, or doing things I know I shouldn't do. I totally understand Paul when he says:

And so that is what I'm dealing with right now. Especially the part that talks about not understanding the things I'm doing and doing the things I hate. It's so hard sometimes. I often find myself just crying out to God for some peace in this storm of my life and hoping for a little wisdom and a little happiness to block out the rain. I get this happiness sometimes. When I'm onstage, for instance. When I can live a life that is not my own, I am happy with it. When I can throw myself into another person (whether that is a character or a relationship or whatever) I can block out the storm a little. What I really need to do is just keep throwing myself into my relationship with God. I know this, and yet I fall on my face so often because I can't seem to wait for His guidance on what path to take. It's like I'm standing on the edge of a cliff and can barely see the cliff on the other side of the massive abyss. There's a rope bridge but I can't see it. God is guiding me toward the bridge, but I'm trying to go my own way and step right off the edge. Even though I know my way will lead to dispair and possibly death, I still try to do it my way. Just because I have trouble trusting that the bridge is there and that it is the best way across.

I wish my life wasn't always at a crossroads. I wish I could find the right path and take it. I'm ready for the path to be straight for awhile, and I'm ready for it to be very clear which direction to take. I'm not sure what the point of this post was, but I'm going to submit it. Maybe by sending it out there into cyberspace, something good will come of it.
Posted by Anita Powell at 11:38 PM No comments:

Email ThisBlogThis!Share to TwitterShare to FacebookShare to Pinterest
Labels: faith

I just looked at my countdown and realized we have only 11 days until Beaux Stratagem opens! Wow! That's one thing about doing two show - I feel like there's almost no time between the two openings! I am so looking forward to seeing everyone in costume. Mine is done and it's adorable! I think it's my favorite of all the costumes I've worn so far! I have more lines in this play and a lot more blocking, so it's a more challenging experience for me. I'm happy to have it.

But I'm taking a break after this one. I swear I am!

After all, November is just around the corner and you know what that means!
Posted by Anita Powell at 2:32 PM No comments:

wrapping up The Odd Couple

Yesterday was the last show for The Odd Couple. First, let's talk photos. You can see them here.

Since my first community theatre audition, I've been in this kind strange competition with myself, to see if I can do more and more and more. I've done shows back to back, I've done musicals, and I've done everything there is to do backstage except making costumes (which I'm really bad at and they really don't want me to be a part of it!) But this was the first time I've ever done two shows at once. Devon said I would learn a lot about myself during this process, and (no surprise here) she was right.

I've become very familiar with my Theatre 98 home and family. Auditions are no longer scary and walking into that theatre is as comfortable as walking into my living room at home. I'm greeted by old friends and am excited to meet new ones. I'm generally aware of the inner workings of the theatre because of my board participation. It is my theatre.

Walking into the Chickasaw Civic Theatre was a totally different experience. Although I walked in with my roommate and I knew that the director of this show was a friend from college, it still felt very foreign. I didn't know anyone else in the room. The stage was massive, much larger and more imposing than my intimate little stage at T98. Needless to say, vocal projection is much more of an issue in a larger space with a larger stage. Something I had to learn during this process!

After auditions, I assumed I didn't get a part. I didn't feel great about my reading and I thought some of the other ladies did a much better job. I always feel this way, even at T98, but this was a much more intense feeling - mainly because I had just seen one of the ladies in a previous production and knew she performed at this theatre a lot.

The call came in very quickly, possibly the next day, although I don't really remember. My roommate and I both got parts - we would be playing the Pigeon sisters. We were both really excited.

Throughout the rehearsal period, I am happy to say I got to spend time with Leo, the director (who I haven't seen since college) and Shannon, the roommate, and the rest of the cast. The poker playing guys were a riot and the two men playing Oscar and Felix were simply amazing. Both on and off stage. Seriously, these guys are funny all the time.

Bonding with Shannon and Leo were my favorite parts, and of course the cast party during which we all played Rock Band! That's a fun activity for a bunch of theatre people!

So what did I learn about me? I learned that I need some free time! Doing two shows at once was very difficult for me because of the lack of free time. When I got home from one rehearsal or the other, I would just want to crash. Laundry suffered. Eating suffered. I never want to see another frozen pizza as long as I live!

But what else did I learn? That I can be very organized if I need to be. I was certain I would forget or screw up and go to the wrong theatre on the wrong days - or say the wrong lines at the wrong rehearsal. That never happened, thank God!

I also learned that people are very understanding and amazing when they know you are sincerely giving your best to something. And that when I push myself, I can accomplish great things. And that when others are relying on you to bring your best performance, you have to do that, even when you don't feel like it.

And yesterday, I learned that when you do a final performance and then drive straight to a rehearsal for another show, it eases the pangs of sadness you feel about the show being over. Oh, I'm still feeling sad about not seeing my Odd Couple friends every day. In fact, I will miss them very much. But every show brings another circle of friends, and I have a feeling that I will remain in touch with some of them for a good long while. Particularly the awesome Leo, who was one of the most humble, gentle, and professional directors I've ever worked with. She didn't get in the way of the show, and that's a rare quality in a director, I think. It's a quality I would like to have one day.

So goodbye, Odd Couple! It was a lot of fun playing on stage and off stage with all of you. I hope to see you again someday soon!
Posted by Anita Powell at 1:49 PM No comments:

Some of you already know this, but I wanted to announce it here for those who do not talk to me in person or are not friends on facebook. I've made it past the first step for a publishing company! They ask for a query letter and synopsis first, so I sent that. About a week later, I got an email back asking for the first 3 chapters or the first 50 pages, whichever was more. So that's the second step! I sent the pages and am now waiting to see what will happen. I'm hopeful but am prepared to hear bad news too, just because if I get my hopes up too high and it doesn't happen, I'll be crushed. But that's the way the business works, right? At least I got past the first step. They liked the concept, which is a good thing.

This is for Summer's Blossom, by the way. It was my NaNoWriMo book for 2005. I've been editing, polishing, and sending it off to publishers since then, and finally I have some interest! Stay tuned for more on this exciting development!
Posted by Anita Powell at 1:40 PM No comments:

Email ThisBlogThis!Share to TwitterShare to FacebookShare to Pinterest
Labels: writing

I tried to embed this, but I couldn't make it work, so I'm doing a link instead. Check out the great segment on Habitat here.
Posted by Anita Powell at 1:15 PM No comments: