January
After such a crazy year in 2011 - getting engaged and then married, going on our honeymoon cruise, and settling in to our life together, we thought maybe 2012 would be an easy, relaxing year.  That changed pretty much right away, when we suspected we might have gotten pregnant in January.  Confirmation would have to wait a couple of weeks, though.

February
We found out for sure that we were going to have a baby in early February.  We were over the moon, of course!  Another unexpected announcement was that our landlords didn't want to renew our lease for the two years we had previously discussed.  They wanted to make it only six more months after February, leaving us wondering where we would be living that summer.  After lots of discussion and budgeting, we decided it was the right time to buy a house - so we would never again be at the mercy of a landlord.  These two events pretty much took over our lives for the next few months as we started to realize just how much would be changing for us.

March
We announced the pregnancy to everyone in March.  Our parents knew earlier, but we didn't want to tell anyone else until we had an ultrasound.  The 10-week ultrasound showed everything was normal and the baby was healthy, so we felt comfortable announcing it to the world.  Facebook made that pretty easy.  We also started looking at houses and were approved for a loan.  Every weekend was spent looking at houses and every evening after work was spent on the Internet searching for more houses to look at.

April
The second trimester was awesome.  I was able to do more and was actually able to eat some things I hadn't been able to eat since before I even knew I was pregnant.  We had a great time registering for baby items and talking about names.  Everyone kept asking us what we wanted.  We just wanted a healthy baby - no, really.  We didn't have a preference for the first.  We found a house we really loved - the third one we looked at - and prepared to talk about making an offer.

May
We visited the house we loved one more time and made an offer on the first of May.  The offer was accepted the next day.  We found out we were going to have a boy!  Some repairs had to be made after the inspection, but the owners took care of them and we got ready to sign the papers...

June
We signed papers on June 5 to become homeowners!  What a huge moment for us!  We were so nervous, but we managed to get all the papers signed and drove to the new house immediately afterward to try out our keys!  Jon changed the locks that night and we made our plans for changes before moving day.  We worked every weekend on painting, getting the front and back yards ready, and deep-cleaning everything.

July
We moved in mid-July.  Not the best idea when you're hugely pregnant and living in the South, but oh well.  The new house was and still is the best thing we could have done for our family.  The dogs love the yard and haven't gotten sick at all since we moved.

August
We took childbirth classes in August and worked on getting settled in the new house.  We started setting up the nursery and had a couple of baby showers.  We were counting down at this point, ready to meet our little guy.  And I was starting to get very miserable.  I was massive, my ankles were swollen all the time, and I never felt rested because I couldn't sleep at night.

September
We thought we had until October 7.  But babies can surprise you.  We went to a routine doctor visit and ended up in the hospital that night.  They induced labor the next morning and after no progress all day, we had a c-section.  Nathan was born on Sept 18 and our lives haven't been the same since.  :)

October
Maternity leave, getting to know our little boy, absolute bliss.  :)  A new mayor was elected and I started looking for a new job.  I knew I didn't want to work for the new guy, so I wanted to find something before I went back to work.

November
Maternity leave, my 36th birthday, Jon went out of town a lot for work, and Nathan started interacting with us more and more.

December
I found a new job that I absolutely love!  It's so nice to actually fit in with the people at work and not have them assume something about me just because of the way I look or where I came from.  They seem to like me so far, which is a nice change.  Nobody is suspicious when I offer to help them, and they don't look at me like I'm an outsider who has no idea what's going on when I try to speak up.  We celebrated Nathan's first Christmas, and it was absolutely wonderful.  And our New Year's Eve is being spent eating Olive Garden to go and spending time together as a family.  What a year!  I'm hoping 2013 can be a little more settled.  :)
Posted by Anita Powell at 7:38 PM No comments:

Email ThisBlogThis!Share to TwitterShare to FacebookShare to Pinterest
Labels: life

I've been taking weekly photos of Nathan every Tuesday.  He was born on a Tuesday, you see, so every Tuesday he's a week older.  Today I thought it would be interesting to see how he has changed over the last 11 weeks.  It was surprising to me to see how much he has grown and changed.  I love this. 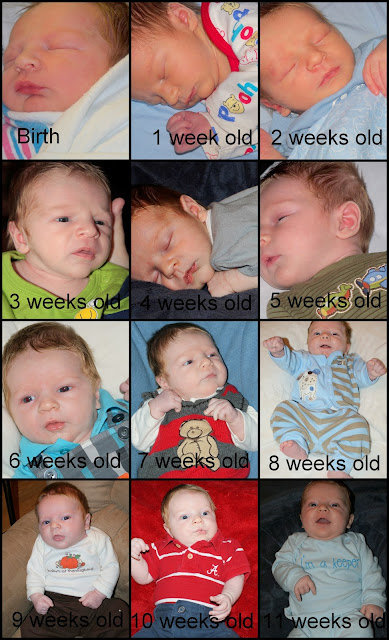 Posted by Anita Powell at 9:51 PM No comments: 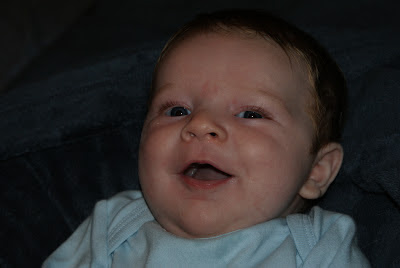 You are 11 weeks old today.  Every day with you is an adventure!  You are growing so quickly and changing so much, it's hard to keep up with you.  Some of my favorite things about you right now are:

The way you smile.  At first, it was just gas.  But the first time you smiled in response to something is a moment I will never forget.  That was several weeks ago, and now you smile all the time.  It is the cutest little toothless grin in the world.  Your eyes light up when you smile, just like your dad's do.  I could watch you smile all day.

Your laugh.  There will come a day when you will laugh a big, boisterous laugh like a man, but for now, you giggle.  And it's an adorable giggle.  It bubbles up from deep inside you and comes out accompanied by one of those wonderful smiles described above.  It melts my heart every time.

The way you snuggle up to me.  You are still so cuddly, something I know won't last very long.  When I think about the days when you won't want to cuddle with your mom, it makes me a little sad.  So I'm determined to steal as many snuggles as I can.

Your curiosity.  You love to look at new things and examine things you have seen before.  I hope you never lose your curiosity about the world.  It is a gift that many people lose as they grow older.

Who you are.  I love who you are and who you are becoming.  You are a sweet, loving, lovable boy who is learning so much about the world and is developing such a fun personality.  I can't wait to see how you grow and change over the next 11 weeks... and beyond that.
Posted by Anita Powell at 9:42 PM No comments: