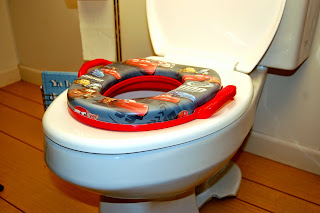 There's a saying I've heard most of my life.  I'll make it more family friendly by saying "poop happens."  You've probably used the phrase or something similar in your own life.  It usually doesn't mean literal poop.

Unless you're the mother of a potty-training toddler and an infant.  If you are, that phrase takes on a whole new meaning.

The Gargantuan Toddler (aka Nathan) had a day without any accidents the day before The Incident. Our potty training method seems to finally be working.  (If you want to know our method, it is very complicated.  He gets a sucker for going teetee and a piece of chocolate for going poopoo.  Don't try to point out the irony of using chocolate for poop - he's two and doesn't understand.  He just knows he likes chocolate.)  Not the best method, probably, but it is working for us.  When he wakes in the morning, I take off his diaper and put on "beebee wawawear" which is his way of saying "big boy underwear" and then he tells me when he needs to go throughout the day.  It's a pretty good system, and the accidents are fairly rare.  My mistake was allowing myself to relax.  NEVER relax, people.  Never.

So I'm feeding the baby a bottle and watching an episode of Gilmore girls while Nathan is playing with his train table.  He suddenly jumps up and runs out of the room.  This would ordinarily seems suspicious, but my kid is extremely unpredictable and hardly ever has a reason for doing abrupt things.  So I was a little curious but didn't worry.  He was gone for several minutes.  I called out to him, asking if he was okay, and he answered "I'm okay," so I assumed everything was fine.

After a few more minutes, when he didn't return, my curiosity turned into fear.  What was he doing?  Why was he quiet?  So I put the bottle down, got up, and started down the hallway.  I saw him in the shadows, holding out his hands.  He was naked.

He said "Mommy," weakly, as if he was afraid to say the words.  The dogs rushed past me into his bedroom and I knew.  I knew something was wrong.  And then the smell hit my nostrils like a fist.  I got close enough to see his outstretched hands and yes, my worst suspicions were confirmed.

Poop.  Everywhere.  I shouted "Don't touch anything" and ran past him into his bedroom.  His carpeted bedroom.  And then I found the dogs.  I don't even want to tell you what they did - I will just say I didn't have much to clean up at that point.  I choked back my own vomit for a moment, and somehow managed to get Nathan cleaned up.  I also put the dogs out in case they got sick after their snack.  I really, really didn't want to have to clean that up.  Ugh.

So after cleaning him up as much as I could, I got him into the bathtub and let him play around a little, just to make sure he got very, very clean.  I also scrubbed his hands to get everything out from under his fingernails.

When I finally got him settled in the bathtub, I went to get the baby.  When had I put him down?  I didn't remember, but he was safe on Nathan's unsoiled bed.  I picked him up and he immediately became redfaced and gave that telltale grunt.

I guess it's true what they say.  Poop happens.
Posted by Anita Powell at 3:48 PM No comments: