About a month ago, I realized my knees were hurting constantly. They popped and creaked too. Now I know I'm only a few months from being "over the hill," but it seemed like something that shouldn't happen. I knew the problem. I've known it for quite some time. I'm overweight. No, morbidly obese. Let's not sugarcoat it. Mmmmmm... sugar.... ;)

It wasn't just the physical problems. I was feeling so depressed that I talked to my doctor about medication.  I didn't want to leave my house.  I cried randomly, for no reason. I had an extremely short fuse with the boys and with Jon.  I hated myself and my life. I wasn't sleeping well and was tired all the time as a result. Just dragging my heavy body around was exhausting. I was in literal and figurative bad shape.

I wasn't sure how, but I knew I had to do something. I started doing research.

The best way to succeed with weight loss and fitness in general is to find something you enjoy. If you dread it, you won't do it, right?

I found the right solution for us in our local YMCA. It actually killed several birds with one stone. Nathan had been asking me about playing with other kids. I needed a kid-free moment during the day to exercise. After more than 20 years of always having somewhere to be (a job, usually) and something on my calendar, it has been extremely difficult for me to have nothing on my calendar now that I'm a domestic goddess. Group fitness classes happen every day and there's an app that puts your chosen class on your calendar.  I'm not self-motivated when it comes to exercise. Group classes motivate me. I see the others doing it, so I do it too. The instructors are encouraging and give pointers about doing things correctly.  Lots of birds, right?

So we joined. And I packed up the kids and went to our first class. It was a Spin class, and it was fun, but wow, did my butt hurt from the bicycle seat! I was literally the largest person there. The next day, I tried Zumba. Again, the fattest person in the class. I admit, I felt deeply ashamed of myself. But the beautiful thing is, nobody looked at me with disgust or said anything rude under their breath. Everyone was encouraging and friendly.

The next day, I did BodyPump. I found out they were one day into the BodyPump 98 program, and that it would be the same routine for the next four weeks. I wasn't sure about weights, but I decided to give it a shot. It wasn't "just weights." It was weight training, cardio, and ab work all rolled into one. It hurt so much, but I stuck it out. I used 2.5 lb weights on both sides of my bar that first week.

Since that day, I've done BodyPump on Mondays, Wednesdays, and Fridays every week, with Zumba on Tuesdays and Pound on Thursdays.  I started with 2.5 lb weights, but Friday, the last day of BodyPump 98, I had 12.5 lbs on each side of my bar for some of the tracks, and never less than 7.5 lbs.

In just a month, I've gone from being unsure about weights to realizing they are my happy place. I've never been so "in the zone" while exercising.

And I never even picked up the medication for depression. I haven't needed it. I've felt so much better in every possible way.

I haven't changed my diet at all.  One thing at a time, right? It takes 30 days of focus to create a habit, or so I've read.  The next 30 days will focus on better eating choices. But even without changing my diet, I have some results to share.

Still a looooong way to go.  But progress, even a little, is encouraging. 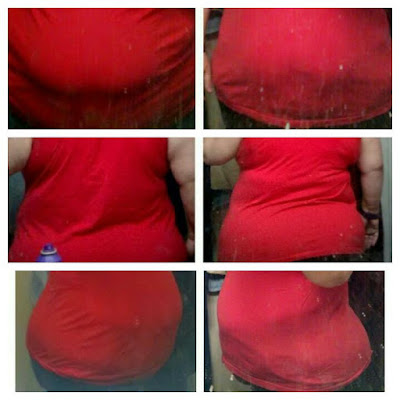 Posted by Anita Powell at 11:44 PM No comments:

Email ThisBlogThis!Share to TwitterShare to FacebookShare to Pinterest
Labels: health

A few of the weeks didn't really apply to me, so I skipped those.  This week, for example, is all about organizing cookbooks and recipes.  I'm doing okay there, so I didn't worry too much about it.

Honestly, I'm looking forward to moving to other areas of the house.  We have spent a lot of time in the kitchen and dining room


Probably the toughest part of this challenge so far has been the plastic food storage cabinets.  They are almost always a total mess and organizing them is a daunting task. 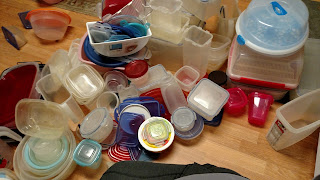 So with a "Just Do It" attitude that would have made Nike proud, I dove in.  It took the better part of a day to figure out what should stay and what should go, and how to organize the whole thing.  I'm very happy with the results. 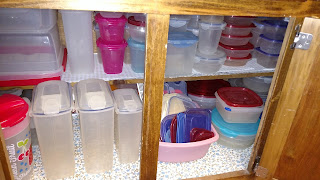 Other completed tasks include: organizing pantry and spice storage, cleaning out refrigerator and freezer, organizing all cabinets and drawers, and creating storage solutions for cooking utinsels.

I have really enjoyed thoroughly organizing my kitchen and dining room, and can't wait to see what's next!
Posted by Anita Powell at 8:35 AM No comments:

Email ThisBlogThis!Share to TwitterShare to FacebookShare to Pinterest
Labels: home

We had Nicholas's first birthday party last month, and it was so much fun to put together!  When we found out the release date of the new Star Wars movie was on his actual birthday, we had to choose Star Wars as his party theme, even though we had the actual party a couple of days later.  Here are some of the things we did, in case anyone wants to use these ideas for their own Star Wars birthday party!  I'll be doing a separate post on how to make the awesome R2-D2 cake.


Star Wars is a great theme for a party!  Have you done a Star Wars birthday party?  I want to see yours!  Link in the comments and I'll check it out!

Posted by Anita Powell at 9:33 AM No comments:

I've committed to doing this decluttering challenge this year.  Clutter is the bane of my existence and it's starting to really affect my satisfaction with our home.  And since I'm here about 90% of my time, being dissatisfied is a BAD thing.  Enter this home organization and decluttering challenge!

I'm using the two together, as they are intended to be used, but I can see how you could just use the weekly challenges and do your own daily missions to complete the weekly challenge.  I really like the daily missions, though, because they give me something very specific to do.  For example, one day the mission was to organize the silverware drawer.  Well, we have about four drawers that could qualify because everything was just that spread out.  I did all of them that day and now I can find everything I need as soon as I need it!

This week's challenge is kitchen counters and sink.  The daily missions mostly support this goal.  Yesterday, I got started with the "organize utensils" goal and just ended up doing a couple of other daily missions at the same time.  I've never been happier with my kitchen than I am right now! 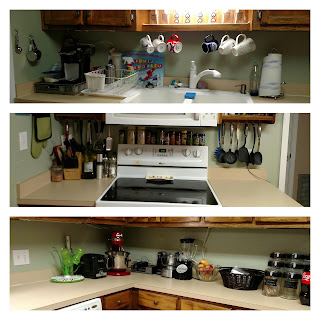 All it took for me to become a believer in this organizational and decluttering system was a few days.  I'm a convert.  I can't wait to do the rest of my house!  I threw a TON of stuff away while decluttering my countertops and silverware drawers.  Broken items, very cheap silverware I bought when I was poor (lol) and that had started to rust, and just junk that we had in drawers that we had no reason to keep.  Next week is cabinets and remaining drawers.  I can't even tell you how much of a relief it's going to be to get that done.

I'm looking forward to keeping my kitchen this nice and neat permanently - and to making the rest of my house look just like this - organized, functional, and pretty.  :)

What about you?  How do you organize and keep things the way you like them?  It's a constant struggle here, and I would love to see how others handle it!

Posted by Anita Powell at 11:39 AM No comments: